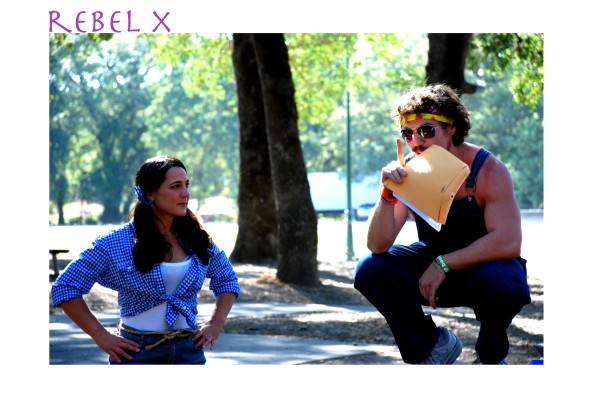 Suzanne accepting her MVH award at our Hillbilly Hoe-down

You Have a Choice

When I sat down with Suzanne Pelz, 43 years young, there was electricity that I’m certain I was the only one feeling. Suzanne is one of those special people that only comes along once in every 3 blue moons or so yet has no idea the spirit she is. Case in point… She couldn’t fathom why I wanted tell her story in the first place! This is why…

Suzanne has struggled with weight her entire life. Not to the severity that warrants an intervention or giving people that she’s on the verge of discovering a new form of diabetes, but rather the kind of weight issues that a lot of people have yet internalize for fear that it’s not TRULY a problem since other people have it worse. Kind of like when you’re in a bad mood over something that is really stressing you out, then a friend comes along and has a problem that is logistically even MORE stressful than your situation so you feel like you have to swallow YOUR struggle because your friend has it worse. We’ve all been in that situation, and we can all agree that it leads to this overwhelming anxiety that leaves you aching for someone to listen but you don’t feel it’s deserved, so you keep it in until it surfaces when you least expect it. The definition of “The straw that broke the camels back.”

What if you did that your entire life with your weight issue? It’s an issue to YOU, but slight in comparison to the morbidly obese. The fear of hearing someone say “YOU think you have a weight problem?! PSH!!!” triggers that anxiety feeling I talked about a moment ago, and Suzanne happened to be in this category. She never joined a gym or took part in group exercise because she wasn’t comfortable with HERSELF, so how could she be comfortable around other people in the environment that was focused around her insecurities?

Now, Suzanne had always attempted to take care of herself yet always seemed to slink back into bad habits. She’d found success for the first time 13 years ago when she took it upon yourself to learn more about weight management and exercise. She’d hired a trainer for one on one time, lost more weight than she ever had before, and was feeling pretty damn good about herself! To her, it was LEARNING about how her body worked that allowed her to start developing tools and skillsets to be healthy. She’d always WANTED to be fit, just didn’t quite know how to do it until she was proactive about it.

If I had a dime for every person that related to this next part, I’d be a millionaire… After some time, finances became a bit tough and Suzanne had to stop seeing her trainer. She was using the new tools she had developed and things were going smoothly for a moment… until she found herself in a wonderful relationship that added the kiss of death to someone like Suzanne; a comfort zone that gave her something else to focus on.

This is where a plot twist gets thrown in. 10 years ago, shortly after the rise and fall of her new healthier lifestyle, she started to feel a tingle in her foot and “off in her feet” when she walked. When the tingling crept up to mid-calve she started to get really alarmed. It was up to her knees by the time she had made it to the doctor. While assessing the situation, the Doctor noticed some eye twitching happening that prompted him to give her an MRI.

For those not familiar, “Schlerosis” means scar tissue on the brain so “Multiple Schlerosis” means you have multiple areas of scarring on the brain. Due to the tricky nature of the brain and nervous system, everyone has slightly different reactions but the reasons why it is so difficult to deal with is the same… When your brain comes upon roadblocks in the brain (scar tissue) it needs to find a “detour” to get whatever message it’s trying to deliver to wherever the destination is. Similar to taking a detour in a car, it requires a longer distance thus takes more gas. Your brain and body is no different… These “detours” the brain has to take drains more energy than average and effects wherever these detours mainly take place. For Suzanne, it’s her right leg that gets the brunt of the difficulty.

4 years after her diagnosis, Suzanne found herself at the heaviest weight she’d ever been. Energy drained, motivation non-existent, and desperate for a change, Suzanne joined weight watchers. After losing 34% of her body weight, Suzanne found herself in a peculiar situation… She still felt fat and didn’t really feel healthy.

I’ve seen this happen often with people who eat for weight loss but don’t give their BODY the work that it needs to take care of itself as well. When this happens, you lose weight but your internal structure is still not in tune with itself. Losing weight doesn’t always mean your body is going to become “fit” and Suzanne experienced this first hand. Unfortunately, this caused a bittersweet back track that would be a low point for Suzanne yet ultimately be the lesson she needed to succeed in the big picture.

1 year ago, Suzanne was in dire-straights. She had gained almost all of her weight back. She found herself prying struggling to get out of bed with no energy, working a full work day, then going straight to the couch after putting her PJs on after work, do nothing, go to bed, and repeat the whole cycle all over again. This is another “If I had a dime” moments… Her Doctor even told her that if she didn’t get up and do SOMETHING her right leg would deteriorate.

It was a biggest loser program at her work that prompted her to take her body back. Suzanne has herself a competitive streak that would make an Olympian blush, and she coupled that with the realization that she didn’t do any exercising the last time she attempted a new, healthy life style. When you know the problem, you know the solution, and she approached that solution tentatively at first…

A turning point for Suzanne was actually when she tried to talk herself OUT of the program. She approached the director one day and started “excuse vomit” culminating with “I have soooooooo much going on I just really don’t think I can go through with this.” The director responded “That’s not good enough Suzanne, there will ALWAYS be a lot of things going on. It’s time to work past that.”

This opened up Suzanne’s eyes to something bigger than the comfort zone she was trying to maintain. She realized she couldn’t hold herself back anymore. She had a choice, and she was at a cross roads… Either choose to let her situation get the best of her or to get the best of her situation. Thankfully for everyone who knows Suzanne, she chose the latter.

After seeing a lot of posts and excitement regarding a fitness challenge called “Rebel X” she decided to ask her cousin, David Moody (already participating), about how she could become a part. After getting set up with the creator and trainer (myself) she was able to join a couple weeks into this 10 week challenge.

This is where Suzanne hulk smashed her demons in a very visible way… Even though she joined late, she lost the most inches out of everybody. Out of 75 people. Holy hell. Out of 3 possible “Most Valuable Hulk” awards (one per team of 25 people) she won hers in resounding fashion. She’s not only at a manageable weight, but the fittest she’s ever been. She took her journey and put it on display to everyone, become a beacon of light for others who, just like her, have only known darkness.

Suzanne is now off most of her meds. She is attempting to break the record for holding a plank out of all 11 of my challenges that I’ve done. She is the first to show up and the last to leave. She calls people out and enjoys getting called out if someone feels she’s not giving it all. When I leave on a trip, she’s one of the first people I ask to be a “team gluer” to check in with everyone and make sure people don’t stray when “the cats away.” There is NOTHING that can stop this woman from accomplishing whatever she wants, and not only does she know that now, but she screams at the top of her lungs to share to the world;

That’s why I wanted to tell your story Suzanne.

One comment on “Suzanne Pelz – You Have a Choice”