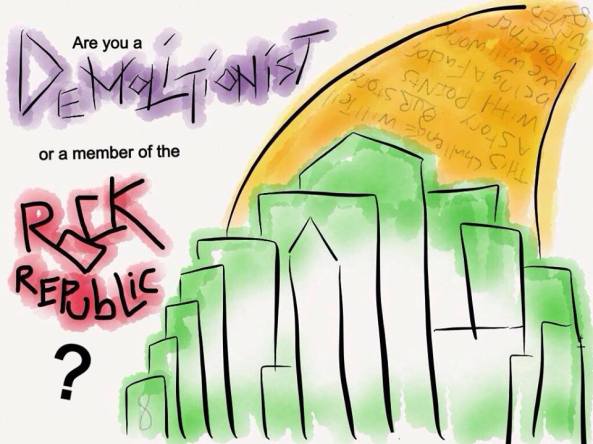 The Rebels Made of Brick: Beyond Emerald City (XIII)
Prologue

At this very moment a tale of galactic proportions is swirling all around you, yet most remain impervious to the story unfolding right under your noses, before your very eyes, and sifting between your very own fingertips. It takes place not in a fictitious universe but simply a place none of us has ever visited. That doesn’t mean we aren’t vital to the plot, climax, twist, and conclusion of this chronicling… After all, it’s said that we all are breathing the same molecules the dinosaurs, Julius Caesar, and Leonardo Da Vinci circulated through their lungs. To be connected isn’t always tangible…

Take the “butterfly effect” for instance. Part of the “Chaos Theory,” this occurrence is described as being “the sensitive dependence on initial conditions, where a small change at one place in a deterministic nonlinear system can result in large differences to a later state.” Simpler put, the flap of a butterfly’s wings can be the very spark of events leading to land-shattering tsunamis half a world away. What if that butterfly figured out how to harness that energy? What if that butterfly learned how to focus that energy and rather than create a wave of tragedy and destruction, stirred up winds of change that carried lost sail boats to shore instead? Winds to give purpose to a little boy’s kite whose belief in magic happens the instant his youthful eyes see that wind vessel dance and never, ever stops believing from that moment on… What if one of the Universe’s smallest creatures realized with a simple act of instinct, it could change the world however it wanted?

Then, imagine if a singular tree branch full of those glorious world-altering butterflies flapped their wings together, synergizing the winds all around them with a mutual focus. No more… No less… Simply using what they were born with like the instruments they are rather than the appendages merely designed for survival they are so often viewed as.

This story isn’t about butterflies however… This story is about a group of Rebels who reside in a State well beyond Emerald City. Far passed Gillikin Country and just outside the Nonestic Sea lies the “State of Rebellion.” A land of forgotten sunshine and grinding routine, the state is divided between two factions of people; The Demolitionists and the Rock Republic.

The same in every way but allegiance, these Rebels (named from the state in which they come from) are known to brandish surly demeanors and keep a nose-to-the-grindstone approach to their lives, giving them the description of being “made of brick” by outsiders. Eventually the description was adopted by the Rebels themselves since… well… straightforwardly for reasons even Rebels didn’t know. It was just the way things were; their way of life. There was truth in the characterization, so they went with it.

With a penchant for purple the Demolitionists always felt in competition with the red-baring Rock Republic. Although they all woke up the same, had the same amount of time in the day, and felt the same joy and pain as one another each side was utterly convinced beyond a shadow of a doubt that they had it worse. A bitter resentment that goes back as far as the birth of humanity, this was another accepted way of life in the State of Rebellion. Never questioned yet always harbored. Generation upon generation of Rebel youth raised to disagree with those who don’t claim the same color “just because.”

One comment on “The Rebels Made of Brick: Beyond Emerald City (XIII)”