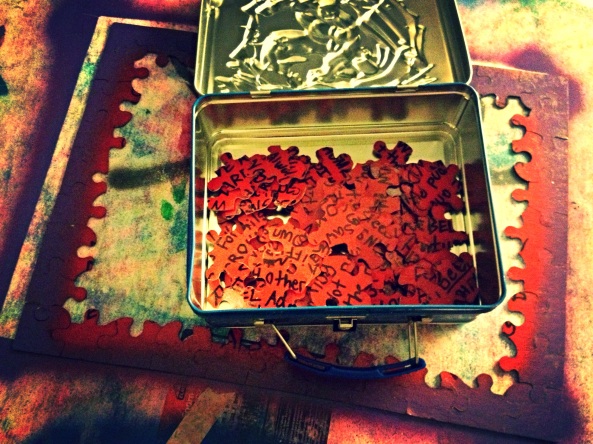 Chapter 5 – The Journey of the Infinite Jigsaw

With every inch earned showcased in the form of a new sweat droplet suspended on their  eyebrow ridges and nose bridges the fiercely determined Rebels made their way to towards the center of town where the mysterious soundtrack emanated with the force of a hurricane. One by one each Rebel fought their way through the chaos and painstakingly made their way to the source of the enigmatic melody, slowly forming a circle around it. As each Demolitionist and Rock Republic member circled up the music began to fade ever so slightly, eventually giving way to complete silence the moment the last Rebel stepped up. At their feet lay a mysterious box emblazoned with a hulking green crest and a simple latch left unlocked.

“…Wh..What is it?” asked an ice-blue eyed Rebel quizzically.

“Hold on everyone, I’m checking ‘Reddit’ now…” proclaimed a short haired Demolitonist wearing an orange headband who was scrolling furiously through “Winkiepedia” searching for an answer.

Before another response could even be thought out another orange headband sporting Rebel stepped forward with authority and declared “Well until Carlo figures it out, I’m opening this son-of-a-bitch!” With her daughter by her side, the purple clad Wonder Rebel knelt down and flipped the unlatched lock skyward leaving the air in everyone’s lungs on pause and a silence so thick it could fill the Nome King’s caverns. With the creaks and squeaks of a door waiting generations to be opened the lid was pushed back to reveal its contents and hopefully provide some answers. What was found instead was… puzzling… to say the least.

“Pick one up, Tami!” someone blurted out.

The suggestion came too late however as she already had one of the cryptic pieces firmly in her grasp; staring into it like a crossword puzzle she was trying vigorously to figure out to no avail.

“What is it?” a Rebel near the back inquired as the group shifted closer.

“It looks like a broken puzzle… with words on the pieces!” Tami answered as she rolled one of the jigsaws between her fingers in careful examination.

“What’s that, Cassie?” Cliff asked, shovel in hand as he noticed movement coming from his left while everyone else’s attention stayed diverted to the right on Tami.

“It looks like… a map!” Cassie shouted excitedly as all eyes switched like a tennis match to the parchment she had just found fluttering on the ground. 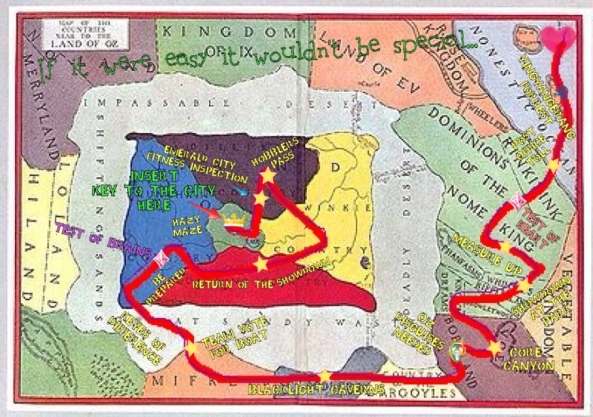 Energy buzzed tangibly as there FINALLY seemed to be some direction! Something to guide them beyond where they’d made it thus far which couldn’t have come at a more opportune time seeing as how clues were beginning to cease increasingly. Even though the tattered piece of paper roughly painted in rudimental fashion didn’t look like much, it seemed to carry with it the weight of a lifetime that pressed on the hearts of all around. Once again it was something that could only be described as magic.

Stenciled carefully on the map were directions through what looked to be a secret pathway directly into Emerald City. To those who lived in the State of Rebellion Emerald City was nothing more than a faraway place many had heard of yet few had actually been to, bringing murmurs of muffled hysteria as Rebels realized what they had in their possession. In Rebellion lore “The grass is always greener in Emerald City” was a euphemism made popular when referring to someone who wants something they don’t have yet here was the very chance to HAVE that greener grass! After all, that was the point of the very gathering they were all at in the first place wasn’t it? Souls tired of accepting less than they deserve, digging in their shields, and fighting for what is most worth fighting for; change.

As each Rebel took their turn studying the map and getting familiar with the blueprint for the journey they all silently and instantaneously agreed they were about to go on, it was hard not to feel the nervousness blast through their bloodstream like migrating salmon. Some would say that all great things carry nerves behind them… Fortunately for the Rebels they were in no shortage of either. Confirming that belief were the words “If it were easy it wouldn’t be special…” scratched at the top.

With each fingerprint firmly placed on the tattered key to their adventure solidifying the bond between each shared glance and hand-off, clouds began to swirl overhead ominously. Bursts of sun rays pierced the gaps between giving the surrounding landscape an aura of hope splashed with an essence of foreboding. Inspired tensions mounted as one Rebel asked the question beginning to come to life in all of them:

“Well, we gonna do this thing or what?”

Rebellious eyes glanced back and forth at one another with anticipation and quiet affirmation slowly building to a roar of declaration. Hell yeah they were going to do this thing! It was during this moment of unity a Rebel with a “7” insignia on his back noticed something else in the puzzle box that had gone unnoticed prior to the discovery of the map. He brushed back his sun-kissed brown hair as he rummaged through the jigsaw pieces to retrieve the envelope buried underneath them. Tugging at the corner, he realized there was some weight to it. Whatever this was, it sure as hell wasn’t just paper…

“Is there something else, David?” someone asked, suddenly diverting attention right back to the box like it had never left.

“Yeah…” David replied. “An envelope with something in it…”

“Well open it up! Let’s check this shit out!” Tami boomed as the rest of the Rebels voiced their resounding agreement.

David tore through the seal with swift intention revealing a hand-scribbled note and a fistful of obscure yellow metal rings that the bottom edge of the paper rested delicately on top of.

“Listen up!” David bellowed as he unfolded the letter with deceivingly steady hands. “Dear Rebels…” 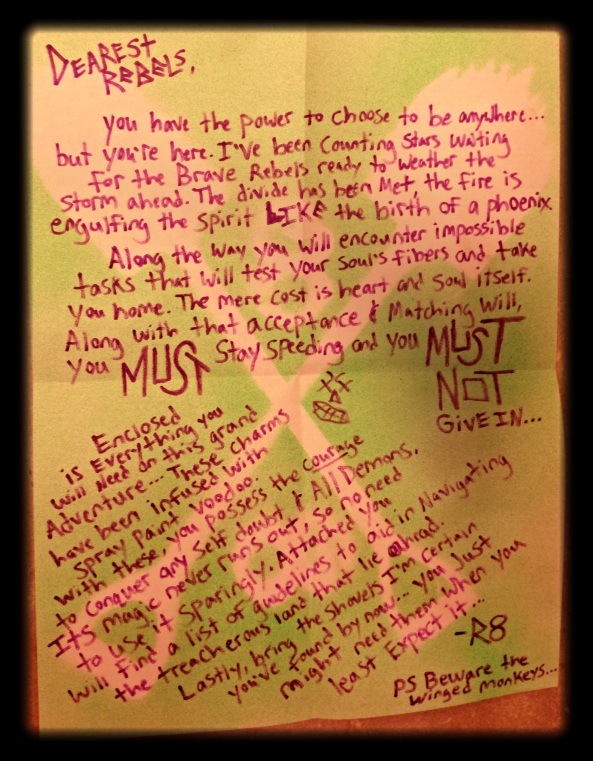 After finishing his narration, David carefully folded the curious call-to-arms and placed it back in the incredibly powerful box that had smashed its way into sudden existence matched in force only by sheer level of resonance.

“What way does the map say to go?” asked a voice marked sharp by the silence it happened to break.

“Good question Suzanne… Aw, here it is! …North West…” Lori responded as her outstretched hand pointed in that very direction like a scorpion tail ready to strike.

“Hey David, what did that last part of the note say? I missed it.” Cassie asked nervously whilst never taking her gaze away from where Lori was gesturing towards.

“Beware of the Winged Monkeys” David muttered with an anxious scowl. 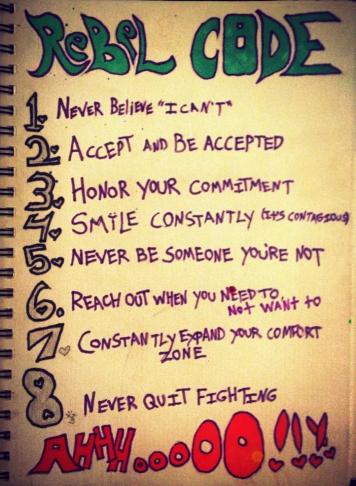